Last month I was fortunate enough to attend Controlled Burn’s Compression Fire & Arts Festival in Reno, Nevada. I had a blast meeting, in person, so many people from the Burning Man community that I’ve met in various online forums.

I brought with me some of what I will be wearing at Burning Man including the infamous shoulder armor rig. It began as a 3 dollar second thought at a thrift store and soon took on a life of its own and consumed over 100 hours of my time bringing it to its present form. I was hanging out around Espressodude’s up-armored Xterra and Kernul Killbuck’s Urban Assault Vehicle on the bridge when I was approached by Dusty Bacon. Yeah, THE Dusty Bacon. Burning Man’s fashion expert himself asked if he could take a photograph of me wearing the armor. You know me. I’m rather shy, hesitant to share, and bashful, but he coaxed me into it… He took three photos that I have been dying to see. Today I found them. He wove them into a wonderful video highlighting the burner fashion that was all about on that beautiful summer day in downtown Reno. I won’t tell you where I appear in it as you really need to watch the entire video to appreciate the day’s fashions and Dusty’s photography. Three minutes of bliss…

I have not embedded Dusty’s video or screencaps here because they are his, not mine, and you need to see his burner fashion site to believe it. 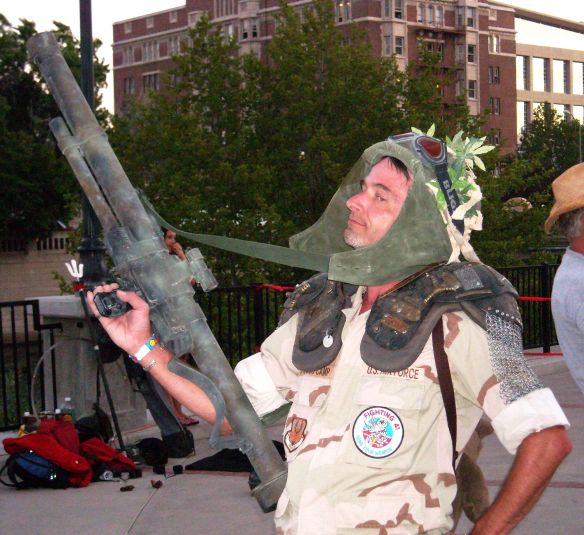 Foxfur in armor. Weapon and helmet courtesy of Kernul Killbuck. 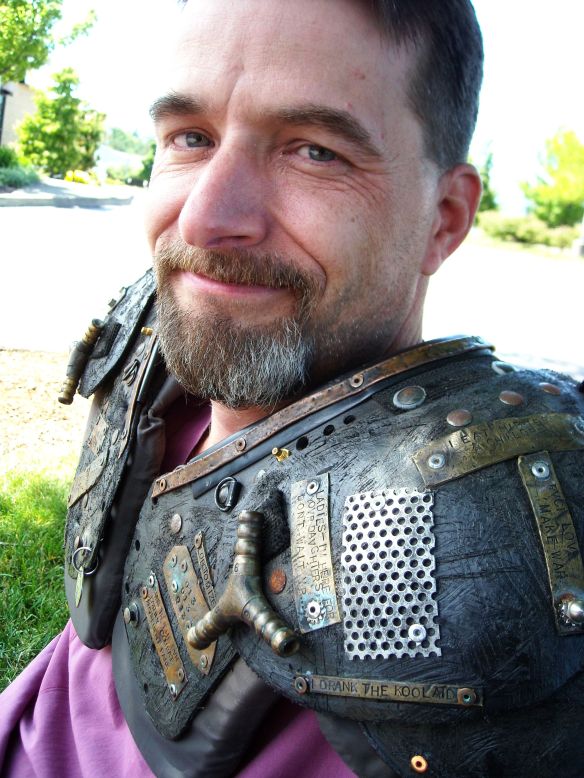 A closeup shot of the armor showing a few of the message plates.

You may notice that there are V’s where U’s should be. I lost the U stamp in my set so had to make do. Thanks ancient romans!

Each plate was beat to hell and dented up, stamped with messages, hammer contoured to fit the specific spot on the armor, riveted or bolted in place, chemically antiqued, buffed, and paint filled to enhance visibility of the messages. There are more than 30 plates.