Recently I’ve been thinking about stories from my army days that are pretty entertaining. I have a bunch of them that I’ll share over time. Here’s one that involves both Sweetpea and I (we met each other in the army).

Sweetpea and I served in a MASH (Mobile Army Surgical Hospital) unit. Our unit was participating in a combined arms training exercise at Fort Drum, New York. It was as close to combat as it comes with the only element missing being a hostile enemy shooting at you. There were armor, infantry, mechanized infantry, mechanized cavalry, artillery, signal, and close air support assets participating. At any moment of the day you could hear tanks rumbling by, the thukada thukada of helicopters skimming the treetops, tremendously loud and low fighters streaking through the sky, the booms and crumps of mortar and artillery fire, and the crackling of small arms fire from every quarter. Special forces units provided troops acting as ground based infantry opposition forces (OPFOR) to simulate enemy forces who would attack us as well as any other unit, stationary or on the move. Needless to say, it was fun as hell, at least for me…

I was the armorer for the unit. I provided weapons, ammunition, and weapons repair services to the troops in my unit as well as supplying them with rocket flares, smoke grenades, grenade simulators, and trip flares. 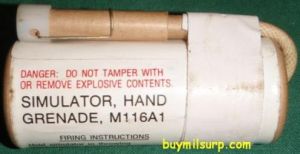 Packed with flash powder, these things make M-80’s sound like a fart in a hurricane…

Sweetpea was a combat medic. She would deploy in a HMMWV (Humvee) ambulance to assess, treat, and transport casualties back to the unit for medical services as required. She not only participated in simulated missions but also treated field injuries sustained by the troops in the exercise of which there were many. These included 3rd degree burns, broken bones, head trauma, and severed fingers. Training, especially combined arms exercises, produce plenty of real injuries and many are unfortunately unavoidable.

Sweetpea also served as our medical supply officer. As such, she was stationed with my section, unit supply, and was co-located in our area. This was a coed unit that provided separate bunking areas for the male and female soldiers. This policy was not rigidly adhered to. Sweetpea and I had our cots right next to each other in the supply tent (the better to provide manual support services at arm’s length…).

As a squared away supply section member I brought along fluorescent lighting fixtures from my shop, a refrigerator (for the beer that I did not bring, heh), and a TV / VCR combo unit among other comforts. Our tent became the defacto comfort station for visiting officers, observers, and dignitaries who did not enjoy the beer that we did not bring…
I also outfitted my weapons carrier with similar furnishings so that when the weapons racks were moved outside it became a posh little apartment, especially with the locking bolt that I installed on the inside of the door.
Sweetpea and I would use the carrier as needed to provide comfort to each other as needed. It quickly earned the title of “The Honeymoon Suite”. Sometimes, as we were performing duties together in the carrier, troops would come by and hit the sides of the truck with the butts of their rifles, jealous motherfuckers. Nothing throws off your rhythm quite like that does…
An important and crucial part of my personal gear was obtained in magic shops, joke shops, and firework stands. I brought everything from blackface soap to fish oil candy (butterscotch candy with a fish oil center), whoopie cushions to pull string poppers (a little black powder and duct tape made great tent flap surprise devices), and firecrackers to whistling petes. I dug and camouflaged a gung-ho fighting position (foxhole) behind our tent facing the outer perimeter and strung said perimeter with multiple lines of tripwire flares, flashbangs, and improvised devices. The fighting position even had overhead protection and was so well camouflaged that several times the OPFOR soldiers walked right up and over without noticing it which allowed us to shoot them in the back. Yay for the element of surprise! I dug a recessed shelf in the position to hold fireworks, smoke grenades, spare blank ammunition, and wrist rockets for Sweetpea and I to use against the filthy vermin who made it through our perimeter defenses.
One afternoon I heard the tak Tak TAK, TAKA-TAKA-TAKA-TAK! of small arms fire approaching our area. I immediately recognized the signature as being that of AK-47’s, the weapons employed by the slimy OPFOR operators. I informed the others in the tent, grabbed Sgt. Sweetpea by the hand, and bailed out the back of the tent with our weapons in hand. We beat feet out to the fighting position and dove in. Within seconds, the evildoers made it to the tent, stuck their muzzles inside, and dumped their magazines into the tent.
Our supply sergeant, his assistant, and our commander, not believing my warning and remaining inside, were immediately “killed” and were marched to the holding area where they were held for the next few hours. Me and the Sweet One were laughing our asses off which drew two of the pukes to our position whereupon we immediately cut them down. Amateurs…
The best moment of the exercise, other than when I nudged over several trees with my truck to make room for our tent, was a nighttime raid. The OPFOR breached our perimeter thus setting off multiple pyrotechnic catastrophes and in the process totally blew their cover. Amongst some of the standard issue devices and methods of perimeter protection were some of my own non-regulation surprises. Included were whistling petes whose fuses had been duct taped over the ends of trip flares, broad and deep cat’s cradles of rope at ankle level, and tripwired soup cans filled with gravel. Right after the seedy bastards thought they’d passed the only regulation sentry devices and thought they could blend back into the night to conceal their positions, they hit our improvised defenses and became bogged down in confusion and chaos. At that time we began showering them with an unconventional fireworks barrage and bewildered the hell out of them. 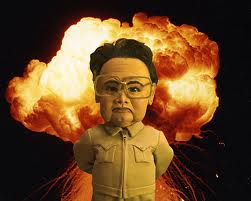 We fired M-80’s by the dozen at them with our wrist rockets, sent volleys of tennis balls at them with remotely fired homemade mortars, and cut off their vision with smoke bombs and smoke grenades. With their senses totally overloaded by the shitstorm they set off, we started picking them off one by one. By the time we were through we’d knocked out the entire opposing force numbering fifteen. Remember, these were special forces soldiers sent up from Fort Bragg to show our pussy asses a thing or two about combat. Fuck yer day!

The next day, there was an enemy prisoner of war handling class at which we learned, you guessed it, how to handle enemy prisoners of war. Somehow, as it always seemed to happen, I was “volunteered” to be the EPW upon whom the SF soldiers would demonstrate. They picked me up, threw me down on my face, sat on my back, and trussed me up like a wild prairie chicken. They also courteously provided my mouth with gag and duct tape. “Fuck! Fuck! Fuck!” I mumbled through the tape.
They then began searching through my pockets. In my blouse pocket they found a love letter from Sweetpea which they read to the whole unit. Thanks special soldier. As they continued to search they happened upon a bar of blackface soap in my trouser pocket. Yep, another muffled “Fuck!”. My cover had been blown and the mess sergeant (who still had remaining traces of black by his ears and hairline) shouted in indignation that I would be getting nothing but oatmeal for the remaining duration of my time in the field.
The pièce de résistance came when the SF soldier withdrew a handful of M-80’s and firecrackers from my cargo pocket.
“Well no shit, this is what must have hit us out on the perimeter last night! Were you on the northeast perimeter?” he said.
“Fuck yeah I was, you damned dirty ape!” I mumbled.
The whole class busted up in hoots and hollers.
The SF guy tossed an M-80 to the colonel. He turned it over in his hands, shook his head smiling, then tossed it back to the soldier saying “I believe that belongs to specialist Fox. Be sure to put em all back where you found em.”
That was a singular moment in my army career and remains one of my proudest accomplishments.
I miss the army…