Last month while blowing shit up at a friend’s house, his wife made the most deeelicious black bean salad I’ve ever tasted. Hers was much more involved than this recipe but again, my aim is to show those who think they can’t cook that they actually can and quite well at that.

Y’all know I’m not big on measurements. I play fast and loose when I make this stuff (much like I typically conduct my daily affairs). Well, Sweetpea likes it so much that she wants to make it when I go out of town so she made me calcumalate whatall it takes to do it right. Now you, dear reader, get to reap the benefits.

This is an easy one. If you can drive a spoon, you’ll do just fine. 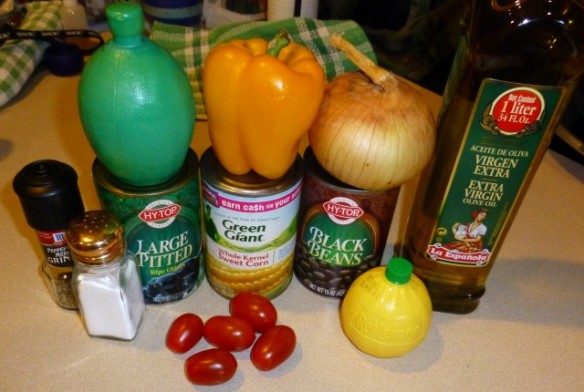 First off, open the cans and rinse the veggies well! This is the secret to good bean salads. The thick goo in the bottom of the beans does not look good at all and will earn you detention with Foxfur. After draining, throw ’em in a great big bowl. One big enough to toss the stuff around in and lose less than a few spoonfuls.

Wash and slice up the onion and pepper. I like using Vidalia sweet or red onions. As stated above, reds are all purtylike. For peppers, red is really dazzling and gives the best contrast, orange will make your hair soft and silky, and green peppers will allow you to find parking spots up to 40% faster! Why no yellow? Because it looks like the corn, silly! Here’s a place where color coordination just doesn’t work. The only coordination I want to see here is in the form of manual dexterity adequate enough to ensure a complete absence of severed digits in your completed salad. When done, toss ’em in the bowl.

While we’re on the subject of peppers,

Olives: You can buy the pre-chopped kind but they’re three times more expensive than whole olives. After rinsing, smash them flat with the side of your knife or machete then chop coarsely. Then, yep, toss ’em in the bowl!

Wash and finely mince the cilantro and then? The bowl? Nope. Set aside for the moment.

Now pour the oil, juices, sugar, salt, pepper, and cilantro into a container with a splatter-proof cap and shake the living crap out of it. Then pour it in the bowl.

Getcha a big spoon and stir well. Toss and turn to mix it all up. Now I’d suggest putting it in the fridge for an hour or two to let it stew in its juices and get all flavory but I’d never ask you to do something that I wouldn’t do myself. Hell, dig in! If there’s anything left over it’ll taste even better the next morning (if that’s even possible).

I highly recommend doubling this recipe. One batch doesn’t usually see the light of day at the Foxes den…

Leave a comment, insult, or just a filthy word or two. You don't even have to register! Cancel reply