I decided to go down to the Portland waterfront to check out / be a part of the Occupy Portland protest this afternoon. I’m not activisty or agitatorish at all but it seemed like something fun to do. In a sea of nebulous agendas and questionable motivations, my goal was clear: to raise public awareness of me. I donned my trademark orange safety vest and headed out. As hard as I tried I couldn’t get any newsies to take my photo. I thought I stood out enough but without dreads, or a serious sign, my efforts were fruitless. I figured a “Hi Mom!” sign was a bit tasteless, so I made a sign with my signature phrase: “YAY!” along with the Burning Man logo, heh heh. I brought along a bag of bacon which virtually nobody was interested in except for one dog who ate two pieces before the hippie who enslaved it yanked it away saying it was on a strict vegan diet. Oppressor!

You’re either with me or against me! Who can oppose YAY? 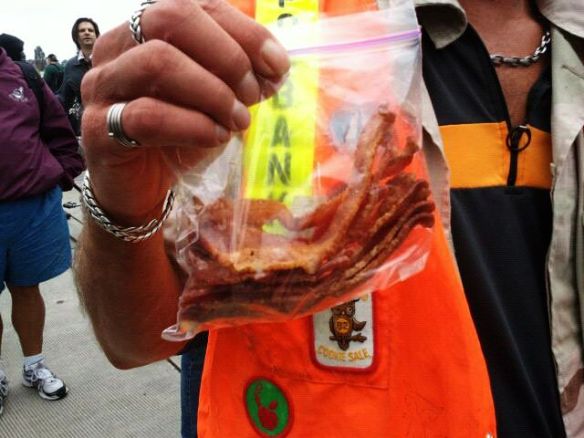 Bacon: Part of a balanced protest.

Pluto is my favorite Disney character! 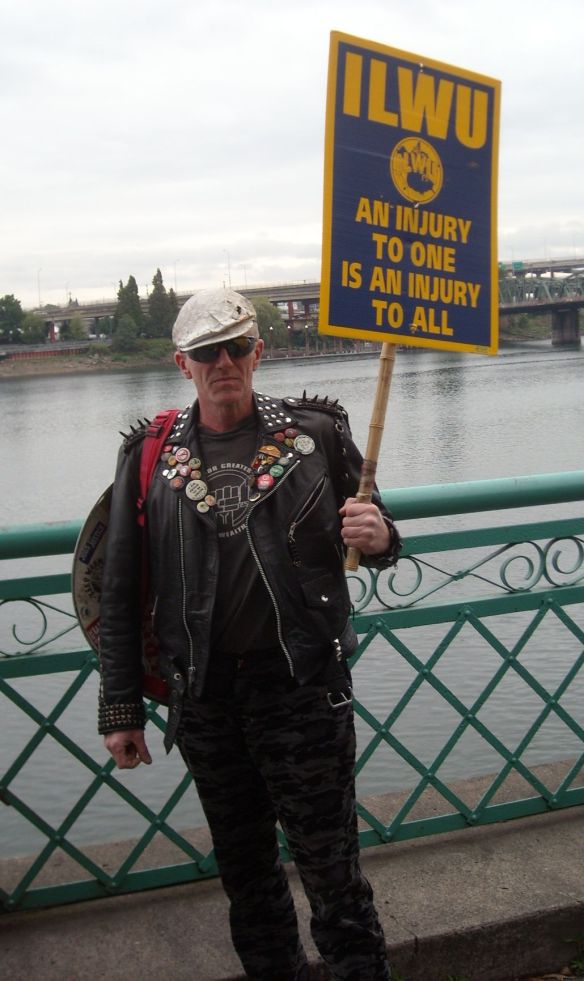 I love his jacket! 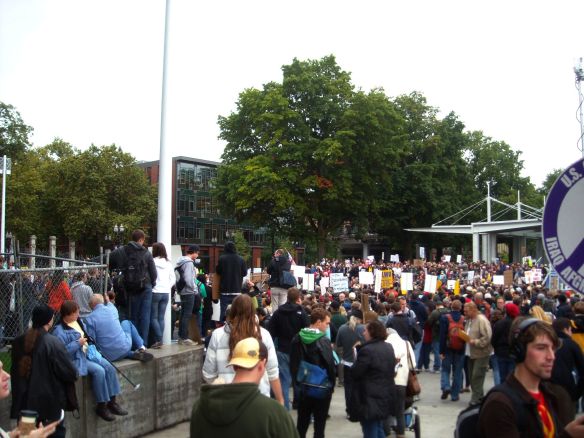 This was my last photo before my camera’s batteries went dead.

The crowd was enormous! I’d estimate it to have been around 3,000. I was impressed with the organized labor showing. Their signs made the most sense out there and had no spelling errors at all. Other folks signs were not so good… “Eet the Rich!” “No Jobs for Oil!” “Nutere the Fat Cats”…

Don’t get me wrong. I’m giving this a pretty light treatment but it’s in accordance with one of my core principles of not taking myself too seriously. The folks there were for the most part very sincere and polite. The crowd was incredibly well-behaved as demonstrated by a group of citizens surrounding two anarchist agitators and making it clear that they weren’t going to let them pull off any shit that would damage the overall image of the protest. I wish it had been captured by a news crew!

The rally ended and the march began. The marchers were orderly and considerate, moving along and obeying the boundaries of the street as laid out by the Portland Police. The police were absolutely fantastic. Very helpful, friendly, and polite. My hat is off to them. They blocked traffic to let us pass through the streets unimpeded and returned waves with a smile. I love it!

I peeled off the march when I saw a food cart peddling chinese food. I ordered some General Tso’s chicken with rice and headed for my truck. Although I am used to footmarches in my combat boots, today was not the day for it. I had my protest experience and had fulfilled my duty under the social contract.

All in all it was a good time. If an Occupy movement comes to your city, participate! There were hippies, yippies, yuppies, and businessmen and women. All walks of life were represented. It may not make a difference, but then again it just might…